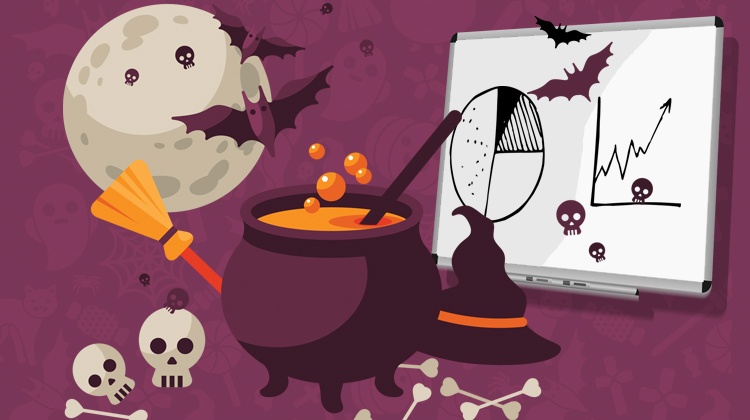 What could be worse than doing all the right things prior to, and in preparation for an amazing strategic planning session only to have the ambiance gods rain on your parade? Silent crowds, nasty jabs from one board member to another, sullen participants who say no one cares about their mission or their good work can really put a stop to positive energy that is critical when envisioning a strategic future. Every strategic planner has had a session or two go terribly wrong and if you have ever facilitated strategic plans I’m sure you have a few to put on your list. Here are a few that hit the top of my list:

The “why are we doing this if we can’t raise money” strategic planning session…
Having the group decide halfway through the session that planning should stop until the fundraising committee could execute a better event.

The declaration that ‘establishing an endowment is greedy’ scenario …
Having the leadership conclude halfway through the retreat that their organization’s drive to put together an endowment was ‘greedy’.

The equipment mishandle that makes silence even more awkward…
Leaving your lavalier microphone on when discussing, in another room, how the group is not at all engaged in the process and everything seems just, ‘dead’.

Strategic planners in all industries have horror stories when, despite solid pre-planning, working a great process, ensuring you’ve paid attention to the details and getting strong support from leadership, things go terribly pear shaped. After you ask yourself what you could have done to avoid the disaster, give yourself a break and realize that planning is a human activity fraught with all-too-human outcomes. Managing the situation once things have gotten a little tense is a testament to your ability to adapt, be flexible and listen. Here were my responses to the three horror stories above. Perhaps you can see yourself doing these things. Perhaps you might have done something even more creative to rescue the situation when your planning mojo started to go in the wrong direction.

The “Why Are We Even Doing Strategic Planning?” Scenario

Sometimes going down an idea ‘rabbit-hole’ happens quickly, before the facilitator has a chance to stop it. In the case of the board who started out happy to plan, halfway through the day, board members began highlighting accomplishments and achievements of the previous board. The former, rock-star board members were entrenched in the community and, as a result, every fundraiser was well attended and raised a great deal of money for the organization. The local economy was also healthy and people were able to give. In a review of past, best-practices, everyone showered praise on the efforts of the former board. The problem was most all had retired from service and the fundraising efforts had been cut in half. Rather than look strategically at their community, their board governance and their event, the board concluded that our planning session wasn’t going to help at all “Because all the strategic planning in the world can’t make up for the fact that our fundraisers are not very good anymore.”

After 20 minutes of discussion about terminating our session, I suggested that the group analyze other factors that might make fundraising more successful in the future. Perhaps it was time to try another format. Maybe people’s preferences had changed and they needed to re-imagine the event. Perhaps something virtual that didn’t require attendance but donors could just give to the organization via a website might be more effective. Another tactic was getting event sponsorship, something the organization had not tried. Finally, I suggested we strategize on how to manage the board membership to ensure it had connected and community-engaged people as this was critical in raising necessary funds for the organization.
The planning session moved forward with a more strategic eye towards building a healthy board and understanding what newer models of fundraising might be more appropriate.

The mission of this not-for-profit was to run one golfing event (bringing in as much as low six-figure funds) every year for four local charities. The problem was recruiting good leadership to run the event. The solution had been to recruit volunteers from each of the four beneficiaries which, over time, had been difficult. When several board members suggested the organization start an endowment in order to hire an experienced leader, one board member highlighted the ‘criminal’ community foundations in neighboring towns with huge endowments. He said endowments had too much money and were choking off the flow of cash to people that desperately needed it. He thought endowments were ‘greedy’ in principle and that all endowments should be entirely liquidated and given to needy recipients. When we pointed out that endowments allow giving in perpetuity long past a single year’s gift, he doubled down on the greed argument, stifling any dissension by the rest of the board.

Jump shift to a ‘purpose’ question. I asked the board, “Are you an organization or are you an event?” If you are an organization, you probably need a professional or two to coordinate this large event and continue to advocate for a variety of different, worthy not-for-profits year after year. If you are an event, you can just run your event and liquidate all the assets every year. However, with the event model, identity and staffing will continue to pose challenges. The board eventually decided they really had just been an event and that without competent volunteers, they were unable to effectively continue. The good news was we pinpointed the real issue and dealt with it honestly.

I was asked to do strategic planning with a national organization on a regional level…with all staff included. This turned out to be about 120 people who didn’t really know each other or work together in any meaningful way. Not only was it was going to be a challenge getting input from 120 people, but in organizing the event in a cohesive manner that would give us coherent results. After some careful table assignments, mixing the right groups of people and ensuring the topics were timely and appropriate for each table, I thought I was ready. I had more than a few ice-breakers with which I had planned to begin the session. I was miked up with a lavalier and wandered freely throughout each of the 12 tables of 10 participants.

Despite the ice-breakers, my coffee-laced enthusiasm and the carefully orchestrated mix at each table, every time I asked a question I was met with silence. I let it hang there for as long as it seemed reasonable and still, nothing! My response was to move into table discussions, thinking a smaller environment would get people talking. While the groups were looking at their table-mates (seriously!), I pulled the executive director aside into another room and said I didn’t know what was up. I was using all of the tactics that had worked in the past. I said I thought the ambiance was ‘dead’ and I would continue to work in the hopes that things would ‘pick-up’ as this audience was the hardest I had had to motivate in a long time. After about 30 seconds of my verbal hand-wringing, someone ran in from the group’s room and loudly whispered, ‘Your mike is on! Everyone can hear you.’

I walked back in to face the group, deciding not to hide the fact that they presented me with a challenge that I was struggling to overcome and now we all knew it. I started making jokes about my inability to manage lavaliers and connect with my audience and asked them to help me not resign from strategic planning altogether, hoping this lighthearted gamble would pay off. Fortunately, everyone was now in on the joke and pretty soon the group was engaged and answering questions. The awkward moment passed and the session continued with a new energy as a result of the humor that bonded all of us.

While strategic planning is rarely risky, sometimes it can be challenging. Staying true to yourself, your client’s goals and your audience will rarely let you down. That and a little flexibility and you’re always one improvisation away from a session that won’t take you into a house of horrors! 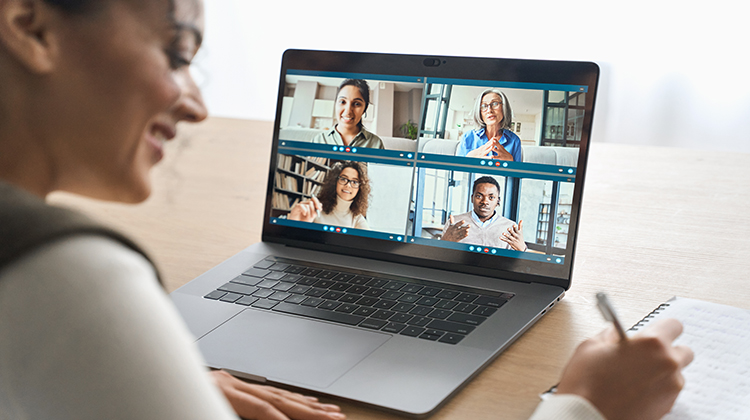 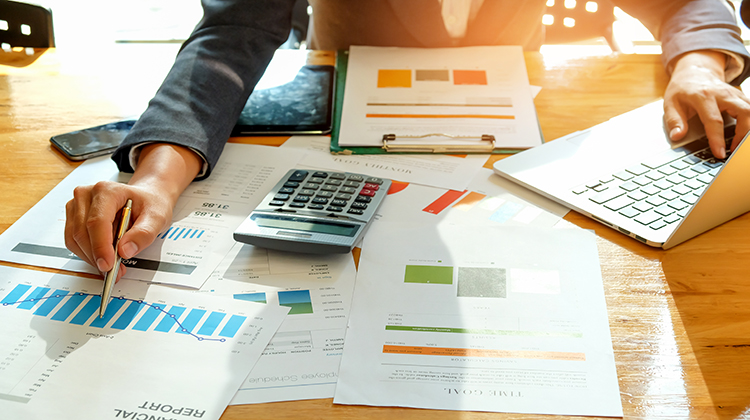 Businessman are analyzing graph data and use laptop computer to record data.

Gap Analysis: Where Do I Start? 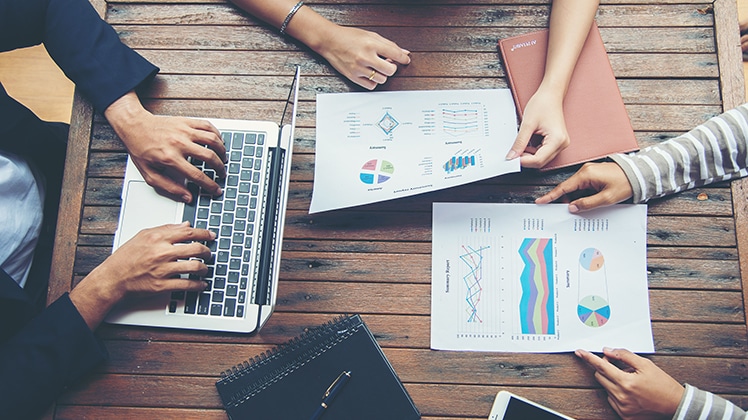 Strategy Plan Management vs. Project Management: The Difference and Why It Matters